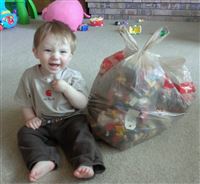 Yes, I know the plural of Lego is Lego, but in my world, the plural is Legos. Deal with it. The other way sounds too pretentious. It’s like calling that fancy sports car a “Porsch-uhhhhh.”

Now that we’ve got that out of the way, let’s talk about the price of Lego pieces (see what I did there?) There are entire websites devoted to the economics of Lego sets. One good example is brickpicker.com. There are also some great breakdowns of the average price per piece by year and also by Lego genre. My parents will notice that when they were buying me lots of Legos, prices were coming down from their peak of $0.40/piece. Note that these numbers DO account for inflation. Today, a good rule of thumb is $0.10/piece is a good deal. Some sets can still be quite a bit more than this.

When you’re buying used Legos at a garage sale or thrift store, it’s probably easier to think in terms of weight. Advice varies a bit here, but in general if you shoot for $5-7/pound, you’re getting a pretty good deal.

Tyla shops at our local thrift stores pretty regularly to find clothes and toys for Elijah. I went with her once and was excited to see a small bag of Legos for sale. Ever since then, she’s been on the lookout and has had some small scores. Last week she sent me a photo of an entire wall of bags of Legos! We had a hard time deciding how much was “too much”, but it was such a good deal, we didn’t want to miss out. She ended up grabbing twenty bags for about $75.

The total haul weighed in at 14.5 pounds which puts us at $5.17/pound. I counted out a sample of the bricks, weighed the sample and then estimated that she bought about 5500 pieces for a price of 1.4 cents/piece.

The only way this wasn’t a good deal was if Elijah doesn’t like to play with Legos. But even if that happens, we could sell this for a profit. Combined with my Legos that are still in Indiana, he’s going to have an incredible amount of building options at his fingertips!