I’ve written quite a few posts over the years about the camera system I use around my house, but I thought I’d write up a new summary of everything that I recommend right now. 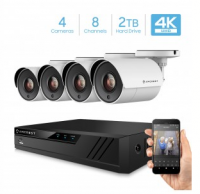 This stuff has kind of turned into a hobby for me, so the setup you’ll see later in this post is probably more than Joe Public is interested in. If you’re not looking to tinker a little bit, I recommend a package deal that includes the DVR along with a bunch of cameras. I bought one of the 8 camera Amcrest packages for church and we’ve been very happy with it. There are quite a few options ranging from 1080p up to 4k with varying numbers of cameras. You can see the full list on their site but there are a bunch of companies in this price range with similar packages. If even that is too much for you, companies like Simplisafe and your cable provider have camera packages but of course you’ll end up paying more for the convenience.

Ok, on to the more DIY solution that I have… all of the cameras I’ve ever owned have been from Amcrest. Are they best? Nope. But they work very well for me and they’re super cheap so I’m happy to replace them when they finally give up. I have one camera that is over 6 years old. I keep waiting for it to die because it’s only 640×480 resolution and I want to upgrade!

It’s possible to buy individual cameras and use the built-in web servers to access them remotely. I don’t recommend doing that. The security on those cameras is terrible and it’s very easy to accidentally (or obliviously) leave your camera open for easy access from the web. I kid you not, when I first was looking through the settings, I couldn’t believe the defaults. I did a quick internet search, typed in the default user name and password and bingo, I was watching a camera inside someone else’s house. Gross. The default settings have gotten better over the years but I still don’t trust them to keep up to date with every new exploit that happens. 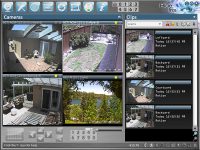 The software also gives me a plethora of options (more than I’ll ever use) for doing things like triggering a recording and/or alert whenever motion is detected, recording the last N days of video, etc. I even played around with having it live stream one of my cameras to YouTube. The interface isn’t great but the feature you want is there somewhere. It might take a little while to set it up, but once you’re done, you won’t need to touch it much.

The other nice thing about having Blue Iris is that it supports a LOT of different cameras. So even though I have kind of standardized on Amcrest, I could easily buy one different brand tomorrow and throw it into the mix and I’d get the same standardized controls over the new camera too.

The final question is how do you want to connect your cameras to the Blue Iris software. The easiest is WiFi and generally that works pretty well. The catch is that you need to plug it into an outlet and if you’re doing outdoor installations, there might not be outlets handy. I’ve started moving to “Power over Ethernet”. To do this, you need a PoE switch that injects power down some of the unused wires in an Ethernet cable. As long as you get a PoE web cam, you can just run a single Ethernet cable to the camera and have a solid network connection and power all in one cable. That’s pretty convenient for those outdoor cameras.

How much does all this cost? Figure about $70-80/camera and then $70 for Blue Iris. There aren’t any ongoing monthly fees. That makes it pretty easy to dip your toe into the water with just one or two cameras to see how you like it. But they’re kind of like Pringles… once you pop you can’t stop! It’s easy to find reasons to add more and more cameras.

If you decide to go the Blue Iris route, I’m happy to help answer questions and guide you through the setup!