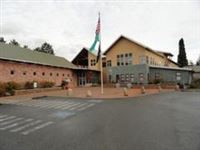 I’m saying this too late to have an impact this year, but the next time a voting opportunity rolls around, make sure you spend some time on the local races. They have enormous impact on your day to day life, much more so than the national races. Tired of congestion downtown? Nervous about some potential new zoning decisions? Tired of that street that needs to be repaved? Want to improve the quality and safety of the parks where your kids play? Concerned about your water quality? All of these things are done right in your hometown, not at the federal level.

Woodinville had a very hot race for city council with lots of mud-slinging and hype. The incumbent is apparently a psycho stalker making physical threats during meetings and the incumbent is accused of violating campaign finance laws. With all this hype, there were a grand total of 1380 votes cast in the race. Your vote really could swing an election. Our water district commissioner race was won by 17 votes!

You’re not going to find tons of commentary in the big media about your local election. They’re going for ratings so they’re going to cover what is common to everyone: the state and federal elections. It’s pretty challenging for me to think of any way that any of my federal votes last time around have had any effect on my life. But the local ones? Those are big. Pay attention, do your research, formulate an educated opinion, and vote!