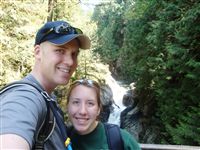 I haven’t had a real weekend recap in a while, but this one was so full, it deserved a post. Commence the bulleted list!

Thanks for a great weekend Tyla!