For Mother’s Day weekend, Tyla suggested that we go to watch the Windermere Cup which is the finale of the UW crew season. She had previously read and enjoyed The Boys in the Boat which tells the story of a UW team that competed in the 1936 Berlin Olympics. Ever since then, she has been itching to see a race and some of the history on campus.

We have never been to a race there and I’ve only been on campus a few times but it all worked out pretty smoothly. We parked on campus just north of the stadium, walked to the east end of the Montlake Cut and then followed the water all the way down to the end of the race course. There is a race every few minutes so it’s not too hard to keep a toddler entertained.

The race goes under the Montlake Bridge. At one point we were standing almost directly under the enormous bridge and Elijah thought it was really neat that the boats got to go under the bridge. Unprompted, he started clapping and yelling as loud as he could: “YAY! YOU DID IT! YOU MADE IT UNDER THE BRIDGE!”

The weather was beautiful and we watched almost all the races (with a slight detour to a bouncy house.) After the race, there is a boat parade so we stayed to watch the marching band float by on three boats and then see the fire boat go by with all it’s pumps turned on.

The area was busy but not nearly as crowded as I was expecting. It was a nice even to watch and I can see us doing it again at some point. 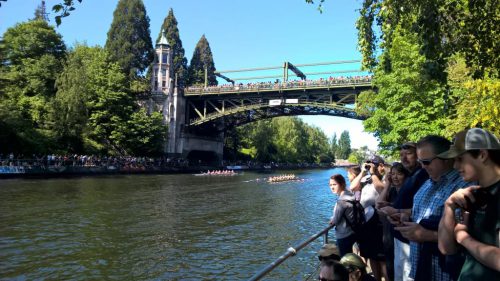