I have a small work area, but I’ve often wished that I had a table I could walk around for easier assembly of projects. I’ve also felt like I should have an outfeed table for the table saw to aid in cutting large pieces of wood. I was able to accomplish both with a single project. The plans come from the November issue of Family Handyman (an excellent magazine!) It’s built out of a single 3/4” piece of plywood so it’s pretty economical. And the plans are cleverly made so that you can cut the plywood into three 32” strips. I had that done right at Home Depot so it was easy to get home and maneuver around on the table saw. Obviously a bigger table would be nice but this has already come in very handy! 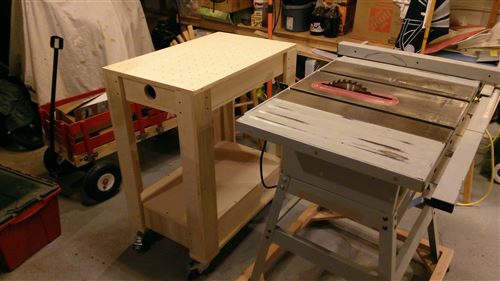 I also attempted to make this into a downdraft table (think of an air hockey table in reverse.) it would help catch dust particles from sanding, etc. There are a little over one hunded 5/16” holes in the top (that adds up to the 2.5” hose size). I drilled a hole in the side for the shop vac, but it probably should have gone in the bottom. It turns out not to matter because the shop vac doesn’t move enough air to make this very useful. If I can find an old furnace motor I might try to hook that up. It wasn’t a big loss though. The modifications to the plans were minor to try this. The top was already a box to make it easier to clamp things to the surface.