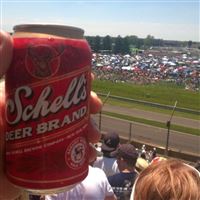 I’ve been using Untappd.com for the last 18 months. It has been fun to keep track of all the different beers that I’ve had. While we were sitting in the stands for the Indy 500, I popped the top on my 100th different beer! It was a Schell’s Deer Brand straight from New Ulm, MN. I suppose technically I’ve had more than 100 different beers but I’m not counting any that I drank before I started using the app.

So now that I have all this data, what are the best beers? First I should start by explaining the rating scale that I use:

I also won’t let a beer get to #5 unless I’ve had it on multiple occasions. Sometimes a beer seems more delicious based on your social situation or the food you’re eating. A 5 star beer should be good any time!

So far, I’ve only given 5 stars to three beers:

There aretwo more beers that are vying for a spot on the 5-star list:

That’s a lot of 4 star beers. I’m thinking I should run through them all again and see if they really are worth of their 4 star rating. Sounds delicious… challenge accepted!