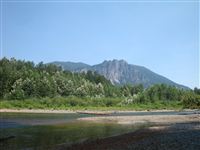 Sunday was another hot day, so Tyla and I decided to take a little adventure. Three Forks Park (just north of North Bend) was one of the first places I discovered on my motorcycles rides. It’s not much of a park, but it is a good place to access the Snoqualmie River about a mile upstream from the falls. Normally I just relax on the bank but on Sunday, we decided to try to swim for a bit too.

We walked along the bank until we found a quiet spot away from the few people who were there. The smart people brought some shade with them, but we weren’t that smart this time. After swimming around for a while, I found a place to cross the river and ferried our stuff (and Tyla) across the river. We chatted, read books, and had a great afternoon.

I hesitated to write about this place at first because I don’t want it to become overrun. Then I realized that the three people who read this probably aren’t going to go anyway.