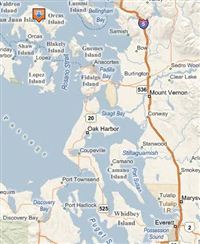 Every year around December, we check out the Washington State Parks website and see which campgrounds are filling up. There are usually some good campsites left at those parks and we snag one for the following year. Previous trips have been to Deception Pass and Fort Flagler. This year it was Moran State Park on Orcas Island.

The first challenge was getting everyone to the campsite. Tim, Andy and I headed up on Thursday afternoon after leaving work a little early. It’s a 70 minute ferry ride and there are not a lot of ferries each day. We eventually made it to Orcas a little after dark, found dinner at a bar in Eastsound and then made our way to the campground.

Our campsite was perched up on a cliff overlooking Cascade Lake. The site had a nice view but there weren’t any level spots to set the tents which made sleeping interesting.

On Friday, Tim, Andy and I hiked with Tucker around Cascade Lake and Mountain Lake, drank some beverages and played cards. Matt and Laura arrived just after dark, and Tyla and Chelsea arrived after 11. Tim and I were getting a bit nervous that they may have gotten lost, and with no cell reception at the camp site, we headed out to track them down. Thankfully we spotted them on their way to the site so we flipped a u-turn and led them to the campsite.

Saturday was a full day of hiking to the top of Mt. Constitution (the highest point in the San Juans), bumbling about in rented row boats, and playing cornhole.

Sunday morning came too soon and we had to pack up to leave. Thankfully we got on an even earlier ferry than we had planned (it was late because of fog) and we made good time coming home.

It would have been nice if the whole group could have been there longer, but I’m really happy that we got to go. I wouldn’t stay in that same site again. There are a ton of good ones to choose from though and the park is gorgeous. Thanks to everyone who came!

Photos are in the photo gallery.