We are thrilled to announce that all is going well with our new baby. This is a lot earlier than we thought we’d be able to say anything, but after our first appointment, the docs said things are going as well as can be expected and we should feel free to tell everyone. Tyla is just starting week 10 so that gives us an estimated due date in early June.

Obviously everything is about to change for us, and while I knew that intellectually, it felt more real after that first appointment when they did an ultrasound. We not only got to see the baby but also hear the heartbeat! Our little baby is about an inch long right now, but he/she already has a strong heart beat, vital organs, fingernails, and arms and legs with joints. We won’t have an opportunity to find out the sex for a couple more months.

Tyla has been doing pretty well with the pregnancy. She usually feels a little bit sick, has some food aversions, and needs extra sleep, but it hasn’t affected her regular routine too much. All the workouts and eating well over the past couple years is paying off!

Telling people big news like this turns out to be a tricky situation in today’s super-connected social networking world. We would have preferred to tell you all in a personal phone call, but we wanted you to at least hear it from us first. Plus, it’s so exciting that I couldn’t wait another minute! 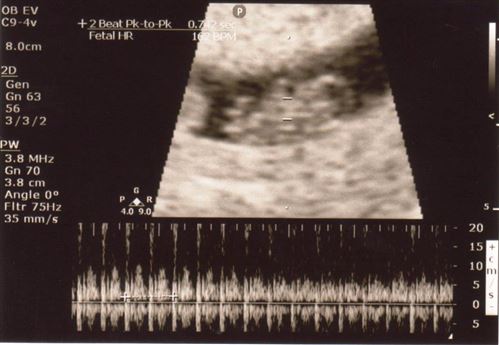 Big things in my life seem to happen every four years. In 1990 I moved from the lower grade room to the upper grade room in our two room schoolhouse. In 1994 I started high school, in 1998 I moved on to college, in 2002 I took my first job out in Jersey, in 2006 I took a job out in Seattle, and in 2010 I got married. The due date is currently in early June of 2013, so I guess that will break the trend… unless maybe 2014 is the year I change a diaper for the first time? I don’t know if Tyla will go for that.