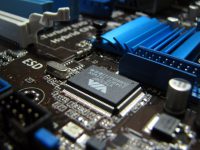 It dawned on me recently that my main home desktop is coming up on seven years old. SEVEN YEARS. I used to be happy if I got four years out of a computer and here I am at 7 years and I can’t come up with any reason why I’d need to upgrade. I took a look at CPU benchmarks and stuff in my price range would only be a ~30% increase of what I have now. Increases in RAM speed and major increases in SSD technology would definitely give me an improvement but I can’t say that I’d notice it much with my use case. I love getting new computer gear, but I think it’s going to be a while before that happens again.

This seems like a good excuse to update my computer ownership history though. The ones in italics are still in use.

I suspect that the next thing we’ll replace is the laptop only because that gets more abuse than the desktop machines. I’ve been very happy with the XPS 13 though. It has held up much longer than our previous laptops and isn’t showing any signs of impending doom.