As I headed out the door at 6:30AM on Saturday, the sensors on top of Crystal Mountain were reporting 7 degrees. That’s about what it felt like all day. But the cold was outweighed by bluebird skies and incredible views stretch from Baker to St. Helens. This was my seventh day at Crystal this season but the first that I’ve been able to see Mt. Rainier.

I took the GoPro along with me and used it for a few runs. Unfortunately the second time I used it I had it pointed down to low and a lot of that footage is unusable, but I did edit together a couple clips. You’ll see the following scenes in this order:

1) The top of the Green Valley chair is a stunner on days like this. It lines you right up for a beautiful view of Rainier.
2) From the top of the gondola, I panned quickly across the horizon.
3) As I rode up the gondola, I spotted a little patch of fresh snow. (It hadn’t snowed since Tuesday night.) It required a short hike but I went for it and enjoyed it.
4) I spotted another patch from the Northway lift and that run was even better.

It was a good day for me to explore the Northway area because visibility was so good and there wasn’t a lot of fresh snow which meant it was less likely to get caught in a bad situation. It’s enormous and I’ve only begun to scratch the surface. I challenged myself by finding fun stuff that I could see from the lift and then trying to get there. Terrain looks a lot different when you’re actually on the ground. At one point I realized I’d missed my mark and started seeing cliff signs to the left and right. Shortly after that I saw a wall of cliff signs ahead of me too. I knew the cliff band and it’s a solid 20-30 feet in most places. Uh oh. These are the thoughts that went through my head: “Am I going to be the idiot who has to call for rescue? I should pull out my phone and take a photo of this. No, Tyla would be mad if she saw the photo. But I’m just going to blog about it anyway. Skip the photo stupid and try to get out of this mess.” There were enough tracks in the area that I was able to pick my way through the cliff band without any real danger. It sure had my heart pumping though!

With this trip I’ve racked up enough vertical feet to rank 3rd on my list of 8 ski seasons. That’s pretty good considering it’s not even the middle of January yet!

On Saturday I headed to Crystal for my 6th ski day of the season and my first day with the new skis. The parking lots were already pretty full when I rolled in at 8:15 for the 9:00 opening. That’s when I realized it was the first day of the ski schools. That’s usually the busiest weekend of the entire season. Visions of long lines floated through my head but never actually materialized. They started loading the lifts 20 minutes early which helped keep the base crowds down. I chose the gondola and after a couple laps on the Green Valley groomers to make sure the bindings were attached to the skis properly, I headed out to Northway. There wasn’t much fresh snow to really put the new skis to the test, but I did have a lot of fun with them. On fresh groomers, my old skis are marginally better. On anything off the groomers, my new skis are much better. In the really nasty big, icy moguls, these skis are too long to do much good, but then again, I’ve always been bad in those conditions so I’m not a great person to review them in that situation.

I spent most of the day hanging out on the Northway lift. Paradise Bowl provided a number of fun lines and I hiked out to Morning Glory Bowl a couple times. That has a lot fewer tracks because not is it quite hidden from anyone who isn’t looking for it, but you have to take off your skis and hike a few minutes to get there. There was a bit of fluffy snow back there and it got me very excited for the first time that I’ll have a real powder day with these skis.

All in all it was a good day to explore Northway, an area that I’ve only skied briefly in the past. There is an incredible amount of terrain, but it’s no joke. Twenty foot cliffs are marked with tiny little signs. They aren’t roped off because people actually enjoy hucking backflips off those cliffs. I say it was a good day to explore because without any fresh snow for a while, there were plenty of tracks to follow. It was clear where the main ski routes were and if there were no tracks then it was definitely a place that I didn’t want to go. I’ve got a few of the routes memorized now so that when that first powder day does come, I can hit some great runs without worrying about where I’m going to end up.

When I left, I was amazed at how many cars were in the lots and happy that I never waited more than 3 minutes for a lift all day. A common complaint about Crystal is that the lines are too long. I don’t know what those people are smoking or maybe they’re talking about the bunny slope. Either way, I don’t correct them. I just say, “Yep, it’s too busy, too flat, and it never snows." It’s their loss.

The first photo below is Paradise Bowl. There are two people just below the cliffs on the left but they are hard to make out in this small image. The second is Morning Glory Bowl. It was snowing lightly and there were no fresh boot tracks on the hike out there so I know that I was the only skier as far as you can see in this photo. Not too shabby for the busiest day of the year! 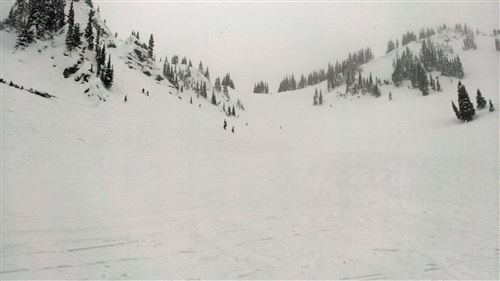 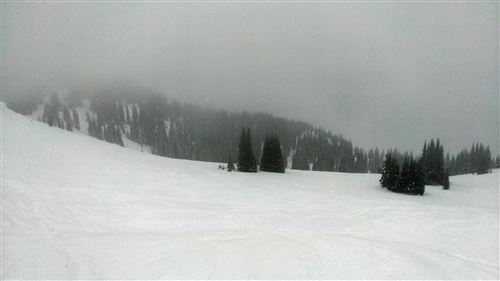 On Saturday I headed to Crystal for my fifth day of skiing so far this season. My watch keeps tracks of how many runs I take in a day and I’ve already done more than the last three years! And what a season it has been so far. The photo below shows the top of the Northway lift earlier this week. They had to dig 9 feet down to make a path for the chair. The snow this month has been incredible! 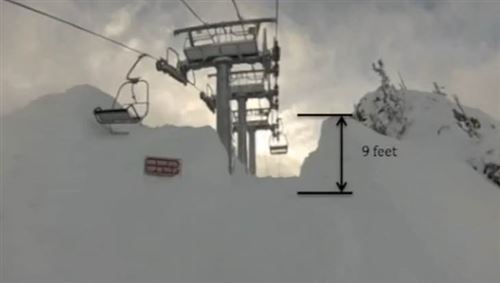 I arrived in the parking lot at 8:15 for the 9:00 opening and I was amazed at how many people were already there. In true Crystal fashion, the enormous parking lot crowds apparently got lost between their cars and the slopes because I never saw big lines. The gondola line was short so I hopped in that and was at the top a little before 9 thanks to an early opening. There wasn’t any fresh snow, but I do love a good groomer so I made about 5 laps on Green Valley waiting for the crowds to show up. They never did arrive, but I noticed that the Northway lift had opened so I decided to explore there.

I discovered a couple ENORMOUS areas that I’ve never skied before and look forward to checking out more in the future. It occurred to me that these new areas I found to ski were bigger than the entire resorts that I used to ski in the Philly area. Crystal had also run the snow cat up part of Northway which is very rare but thankfully it smoothed out the huge moguls that form right near the bottom of the lift.

On my way out of Northway, I decided to attempt the long traverse back to base called I-5. I must have made a wrong turn at some point because I ended up down at LOT E. That was super convenient though because I had forgotten my snacks and was able to grab them from the roof of my car as I caught a shuttle back up to the lodge. The parking lots were completely full by this point (even lot F was filling up) but I still never saw a long line.

The light was starting decrease up top as the day went on so I called it quits around 1:30. It was a fun day for all the new areas I found to ski, but the conditions were nothing to write home about. 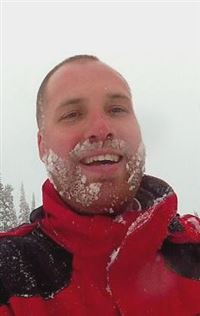 On Saturday I headed to Crystal again. They have gotten a lot of snow since last weekend and the base area really showed it. I could ski all the way to the bottom without much trouble. I didn’t need the rock skis today!

The day started with a great run off of High Campbell and then I spent much of the rest of the time exploring the Green Valley lift. I’ve skied at Crystal more than any other resort and still more than half of my runs were runs that I had never done before. It was a lot of fun exploring.

I did whip out the GoPro for a few runs, but I didn’t leave it on my helmet the whole time. The assumption seems to be that if you have a camera on your head, you think you’re awesome. I could spend all day telling you why I’m not awesome, but still, I’d rather let people laugh in silence at my skiing. (I regularly hear jests shouted from chairlifts to people who fall wearing a GoPro.) Anyway, I got some decent video of one run and have posted it to YouTube so you can watch. It occurred to me that much of the video is going to look extremely similar so I probably won’t post a ton of it going forward. I have a lot of fun with the camera though!

Steven Pass was probably the place to ski today though. They got 2 feet of snow on Thursday night and 4 feet last night for a total of 69” at the base. They had to spend quite a lot of time digging some of the lift chairs out of the snow! Apparently the lines were incredibly long though so I wasn’t too disappointed. A good chunk of the Crystal crowd eats lunch between 11:30 and 1 and during that time, I repeatedly skied right onto the lift.

The day ended slightly early for me. I took a break around 1:30 and then rode the gondola back up to get a few more runs in. About three turns into my first run, I got cramps in both thighs. Thankfully one lightened up but my right leg was pretty rough. I made it the 2500 vertical feet back down to the base and headed for the car. It was a good day and there’s no reason to push it.