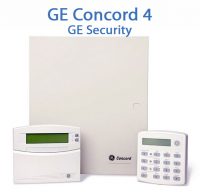 There is one major home improvement project that I’ve written very little about. Soon after we moved in, I went down a month long rabbit hole of learning about DIY alarm systems. The idea is basically to install the same level of hardware that a company like ADT would install, but skip the middleman. You install the hardware and you connect it to a monitoring company. We paid about $500 for the hardware and then $10/month for the monitoring. I wasn’t comfortable sharing the details of it in the beginning because I wasn’t sure how secure it was. That concern was probably unwarranted.

Our GE Concord 4 system worked flawlessly, but it was one of the hardest projects I’ve done. The hardware itself is relatively simple. All the sensors have two wires and they are either normally open or normally closed. The wireless sensors are easier to setup and just need to be paired with the base station. The catch is that the main circuit boards for these units are 1980s-90s technology. Forget connecting your computer to it and configure it. Instead you have to type incredibly long series of numbers into the keypad to change settings. For example, if you want to change a setting, you press 8, your four digit master system code, 0, 0, and the four digit code to select the right program setting. Then you actually get to make the setting which is usually a one digit number (on/off, number of seconds, etc.) The installation manual is 113 pages long. It’s intense.

But you know what? I’m still glad I did it, partially because I learned something that was really complex and because it saved us a LOT of money both on the initial hardware purchase and on the monthly monitoring. We have easily saved thousands of dollars compared to using a standard consumer alarm system.

I’m getting tired of having a landline just for the alarm system. It wasn’t so bad when we moved in because our cell phones would regularly drop calls. Coverage and phones have improved and that’s no longer a problem. So the phone line really is just for the alarm. And no, you can’t use a VOIP line (like Comcast phone service) for an alarm. It has to be the old-fashioned POTS phone line.

Well the good news is that since I custom installed my own hardware, I’m free to switch over to cellular monitoring and switch to a different monitoring company if I want to. The problem is that I REALLY don’t want to go down that rabbit hole again. I started looking into it and it’s pretty complex and the technology is frustratingly ancient. I’m sure it would work, but I don’t have the patience.

Thankfully, a number of companies have stepped up to offer DIY home security products. You get the benefits of cutting out the middleman without the headache. This post is getting long so I’ll keep you in suspense until tomorrow about what we’re using now and how we like it.

One thought on “Custom Alarm System”