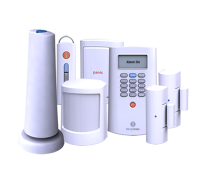 (This post will probably make more sense if you read part 1 from yesterday.)

Before I start talking about our new system, let me back up and explain what I want out of our home security system in order from most important to least important.

I chose SimpliSafe. They’ve target my exact scenario and they’ve been around for long enough that I trust them to provide me with a good product.

The setup process is extremely simple:

Unfortunately, my case wasn’t quite that simple. My base station came with a T-Mobile SIM card in it and the T-Mobile signal was so bad that I could only rarely get a connection from a single point in my house. After a lot of trial and error, SimpliSafe agreed to send me a replacement board for the base station that uses Verizon’s network instead of T-Mobile. That worked a lot better.

Our monitoring is now $15/month but we dropped $55/month for the home phone and $10/month for our old monitoring company. So we are saving $50/month! We’ll recoup the ~$400 hardware cost in 8 months.

I love these projects that cut out huge monthly bills! It’s much more fun to spend money when you know that you’re going to save that much in a short amount of time.

I also feel good using an alarm system that is easy to expand and modify whenever I want. I suppose there’s a chance that it’s less secure than my old system, but remember my priority list. I’m ok with that. I also don’t have any evidence that it IS less secure. My old system had plenty of wireless sensors and the landline was very easy to cut. A determined and intelligent burgler is going to know how to get through most consumer grade alarm systems anyway. The trick is to just be a more uninviting target than other people in your neighborhood. It’s kind of like hiking in bear country with somebody that runs more slowly than you.