We were carrying a box through the garage and accidentally dropped one on the Subaru. Bummer! It’s not a huge deal on an 8 year old car with lots of other dents and scratches, but since I’m hoping to trade it in some day, I thought it would be nice to try and fix it, but I wasn’t willing to pay a shop to do it. 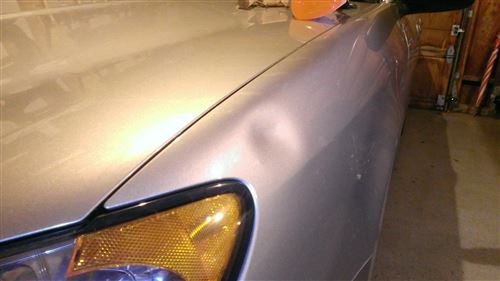 Some quick searching around online revealed that most of the “as seen on TV” dent remover kits are really just hot glue and some pressure. So I headed to the garage, chopped a spare 3/4” dowel rod into a few short pieces, and ran a screw through them to give me something to grip.

I started with an old dent on the passenger side door made someone’s by an errant golf shot. I cleaned the area, hot glued the dowel to the car and then waited about 5 minutes. When I pulled on it, it came off very quickly leaving most of the glue on the car. So I heated up the glue on the car with a heat gun and added a little fresh hot glue too. I waited five more minutes and this second attempt stuck MUCH better. The dowel eventually popped off under my pulling but not before removing most of the dent. It was enough success to try it on the front fender. 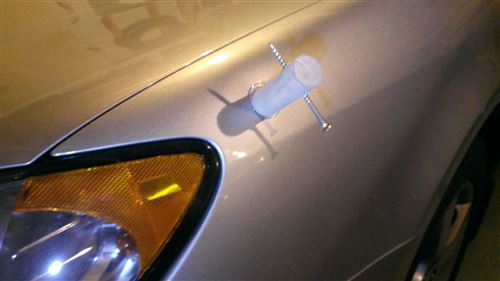 The same process repeated itself with the first attempt pulling off too easily. The second attempt stuck so well that I decided I’d gotten it as good as I could get it and the dowel never popped off. I was concerned about pulling any harder on the sheet metal because it was starting to pull up from the headlight area and I didn’t want to break anything. After using the heat gun to melt the glue and get the dowel off, I used the heat gun and Goo Gone to remove the rest of the hot glue.

The pictures might not show it perfectly, but it greatly reduced the size of the dent. It’s FAR from perfect. There’s still a dent though it’s probably 70-80% smaller and there are still scratches in the paint, but it’s good enough now that I’m going to leave it alone. 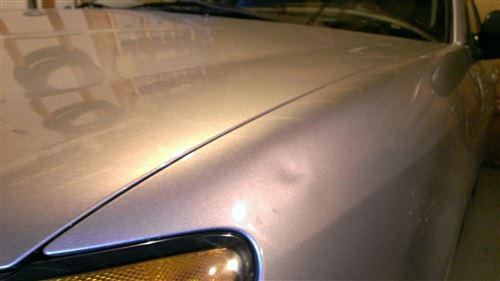 If I had a nicer vehicle, I wouldn’t try this, but for an older beater, why not?