At some point we are planning to put in a proper irrigation system, but I think the backyard remodel is a couple years out. Since I’ve been spending so much time learning about caring for a yard, I don’t want to let it die off during the summer months when we don’t get any rain. But I also don’t want to have to move sprinklers around the yard by hand and have hoses laying in the grass. By pulling up an aerial view of my property from King County, I realized that with three sprinklers, I could cover most of the front and side yard. 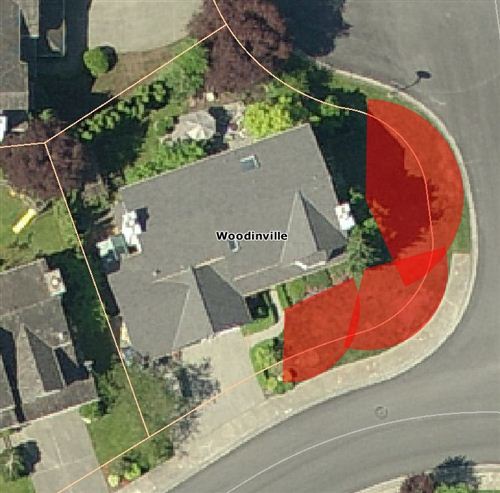 I picked up three Melnor spike sprinklers, a 100 foot 8 ply 3/4” hose, and some female and male hose repair ends. (On a side note, I’ve been so impressed with that brand of hose that I have picked up two more of them.) I took the brand new 100 foot hose and cut it into three sections to run from the spigot too the sprinkler and then on to each other sprinkler. The hose repair kit gave me new ends for the hose and that all works very well without leaks. Tim had given me a hose timer so once I get into regular watering mode, that will come in handy. 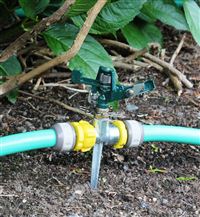 This setup fulfills my requirements of not having to move sprinklers around and I can leave it set up semi-permanently. The downside is that since each sprinkler is covering a different span, the yard isn’t watered evenly. Also, when we had a plumber add a pressure regulator valve to help with the water hammer in the house, he turned down our water pressure to 40psi. Now that I’ve installed arrestors on every termination point in the house, I was able to crank that up to 50psi. 40 wasn’t enough to power all three sprinklers but 50 is just enough.

I also added some Y valves to the middle sprinkler which allows me to selectively shut off sprinklers down the line. This will come in handy when I need to water that big first section a little longer, and it was also helpful for tweaking the water flow to each sprinkler.

It takes me about 75 minutes to put down 1/2” of water in the big section on the east of the house. (An easy way to measure it is to set a used tuna can out in the yard while you run the sprinklers.) Once we get into summer I’ll set it so that it puts down 1/2” twice a week. For now we’re getting a few tenths a week spread out over many days. I’ll supplement the rain with a deep watering every once in a while.

Hopefully this work will leave us with the nicest yard on the block!