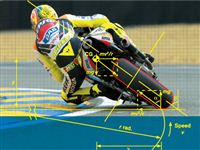 If you don’t think that your physics classes were very interesting, hop on a motorcycle and whip through a corner or two. You’ll probably start thinking about those few square inches of rubber that are touching the pavement and somehow holding you in place. How does that really work?

Most of this post is a summary of a longer article so please head there if you want the full story. There are a lot of other good motorcycle physics discussions there too. The basic idea is that there are two laws of friction:

The first one makes sense, but the second one probably sounds a bit odd. It states that if you set a brick on it’s end or on it’s side, it will start sliding at exactly the same angle either way. It might sound crazy, but it’s true.

So let’s apply this to a motorcycle. The first law states that when you brake you have more traction on the front tire because the weight is transferred to that tire. The second law says that when you corner, you have the same amount traction than you did standing up straight because you have the same weight of the bike pushing down into the pavement. (The force imparted from going around a corner is parallel to the ground so that doesn’t give you additional friction.) However, while you may have the same amount of total traction in a corner, you’re also using up more of your available traction to go around the corner. You can’t grab a handful of brake and expect good things to happen.

The second law always means that the size of the tire makes no difference in the amount of traction you have. In theory, if you built a bicycle tire and a motorcycle tire out of the same rubber compound, they would provide you with the exact same amount of traction. So why are motorcycle tires fatter? You get better handling characteristics from having a tire with a bigger curve on it. You don’t go from tread to sidewall as quickly when you lean over as you would with a bike. Also, most motorcycle tires have a tougher rubber compound in the middle for long tire life and a software compound on the sides for more grip.