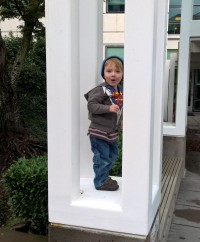 Elijah is almost two and a half years old now! It’s rare that a day goes by without Tyla and I looking at each other and saying “Where did he learn that?” He’s picking things up so quickly! He recently discovered a love for Legos. We’re starting him out on the regular Legos and skipping right over Duplos, but that doesn’t seem to bother him. He mostly likes to point at things in the book and ask us to build them for him, but he has started trying to construct things on his own. For a couple days he was carrying around something and we couldn’t understand what he said it was. Finally Tyla deciphered that he said it was a “motor home.” So there you go Future Elijah. The first Lego project you thought up and built yourself was a motor home.

His memory is incredible. He quickly picks up lots of songs that we sing to him. You never know what he’ll start singing as you are walking through a store. His favorites right now are the Doxology (Praise God from whom all blessings flow…), the ABCs, Zacchaeus, and Deep and Wide. The other morning I had “Momma’s Don’t Let Your Babies Grow Up To Be Cowboys” stuck in my head and I guess I was singing it a lot because later that morning I heard him singing it while playing with Legos. He also has the common table prayer memorized and when he’s really hungry, you’ll find him in his chair saying the prayer as a hint to us that it’s time to eat.

Elijah is getting to a good age for me to get work done around the house with him. In fact, if he knows I’m going out in the garage to work, I usually shut the door and hear him crying behind me. He loves to follow me around whether it’s woodworking or working in the yard. The other day he told me, “We need to fix this house. It’s basically falling down.”

Having a two year old running around the house is a challenge, but I love this little man! He’s got a great personality and it’s awesome to see his world growing day by day.