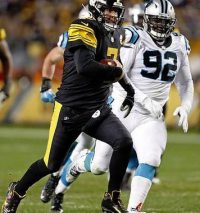 The Seahawks are now 4-5 and are looking like they have a pretty good chance of hitting my 8-8 prediction. That might even be a stretch. If they can beat the Packers after this short week then that will be a big help because you hope they can beat the 49ers twice and the Cardinals. They kept this last game interesting but the magic isn’t there. I loved seeing Russell running more. I wonder where that’s been all season?

Our league was kuh-razy. It was the most total points for our league this season and there were two huge upsets as Luke took down Tyler and Nick squeezed out a high-scoring win over Andy. Those games were crazy too as Luke’s Monday night player scored just enough to beat Tyler before leaving the game early and Nick was one fumble away from losing his game on Monday night too.

Everyone has over 1000 points for the season now but there’s a pretty big separation between positions 1-4 and 5-8. The playoffs are far from a lock though. Andy and Logan should be feeling pretty good about their chances but there are still 4 games left before we start our playoffs and crazier things have happened. Next week’s key matchup is Andy vs Tyler in a battle of #2 and #3.

After putting up 350 points in two weeks, Logan is obviously on top of the power rankings:

On to the weekly records: