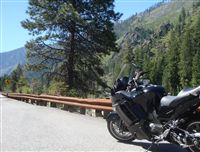 I found myself with a relatively free Saturday morning. It was such a gorgeous day that it would have been a crime to sit on the couch. I fired up the bike and left the house at about 8:15AM.

My ride took me up north on 203, east on 2, south on 97, and west on 90 for a 240 mile loop. Along the way I flew through Stevens, Blewett, Stampede and Snoqualmie passes. I’ve done this ride once before on the old bike but in the opposite direction. I love seeing how quickly the scenery changes as you head over the mountains. The west side is very lush and green. The east side is more brown and dry. The tops of the passes still have five or six feet of snow in places. On Saturday it was between 75-80 for the whole ride which is just about perfect.

This was the first long ride I have taken with the new bike. While I did need to make a stop every 60-75 miles to stretch, I think I could handle a 400 mile day which is good because I’d like to tackle the Cascade Loop this year.

Here’s a little tip if you make the same ride, skip downtown Monroe and look for Ben Howard Rd. It’s a beautiful ride! Tyla and I found it while trying to avoid some traffic. It’s longer when there is no traffic, but it’s worth a few extra minutes for a lot of extra smiles.

There are four photos in the gallery. I snapped them about 10 miles west of Leavenworth along the Wenatchee River. All the rivers are very full with all the melting snow and this one was no exception.

I was back home by 12:30. For the rest of the day I kept reminding myself of the things I had already seen that day! 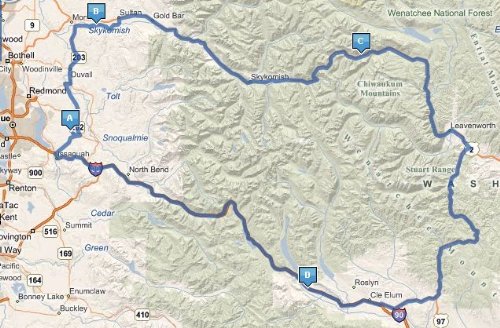