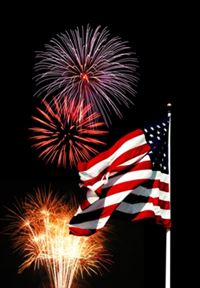 Happy Fourth! Here are some fun trivia facts to annoy your friends and family: