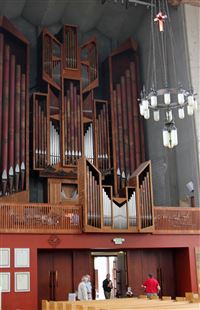 If you came to our wedding, you know that we have some extremely talented musicians in our congregation. The lady who played the flute is in the Seattle Symphony and the man playing the organ just completed his Masters Degree in organ. He asked me to help record his recital, and I, of course, accepted.

The recital was held at St. Mark’s Episcopal Cathedral in Seattle. I don’t know much about organs but this one looked and sounded very impressive. I overheard somebody saying that this was one of the most impressive organ installations in the United States though I have no idea how authoritative the speaker was.

The audio recoding was being handled by an audio engineer, so all I had to do was take care of the video. I just got the recording in my hands and it will take a while to edit it all, but for now I can share some of the photos that I snapped. The best way is to check out the PhotoSynth.