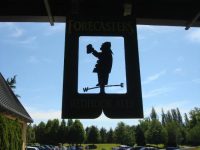 Say it ain’t so! The Seattle Times reported yesterday that Red Hook is packing up their kegs and leaving Woodinville. Apparently Red Hook is selling less beer than it used to and the Woodinville site has been operating at 30% capacity. They are adding on to a brewery down in Portland so there’s no need to keep this site open anymore.

I’m personally sad to see them go. While their beer is very popular (which means somewhat generic), I really enjoy having them close by. They were a great dinner location and their tour was a great activity with out-of-town guests. The article says that they are opening a brew pub over in Seattle so I feel like this Woodinville location will probably be closing.

The site will be sold to another buyer, and with a hundreds of up-and-coming breweries in the area, I don’t expect it will be difficult to sell. It’s a big facility for those smaller guys but maybe a couple of them will band together or something along those lines.

Goodbye Red Hook! I still love you but I’ll probably never make it across the lake to your new location.

One thought on “Goodbye Red Hook”