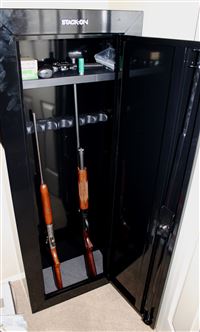 With a munchkin arriving soon, I figured it would be a good idea to have the guns behind some kind of a lock. I don’t have anything special enough to worry about theft, so I went with a fairly inexpensive cabinet from Stack-On. Cabelas had it on sale so be sure to check them out.

The safe isn’t anything fancy, but it has room for eight guns as long as they aren’t too bulky and there’s a shelf on top. The bottom is padded and the barrel rests are made to not scratch your guns. The unit has a few points where it can be bolted to the walls and/or the floor. I thought that was just for security, so I didn’t care too much, but you really do need to bolt it in to keep it from falling over. The holes didn’t align with the studs so I drilled my own holes through the metal. It only took about 30 minutes to finish the assembly on the unit and get it installed.

It’s not going to keep out someone with a crowbar who’s really determined or anyone with the most basic lock picking skills, but it’s more than enough to keep a toddler from getting into it.

Additionally, I haven’t been blogging about one of my biggest recent projects, but let’s just say that I’ll be hooking the cabinet up to my new security system. So even if someone gets into the cabinet when I’m not around, they’re going to wish they hadn’t.