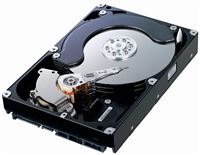 I came home the other night and found out that I had a dead hard drive on my main file server. D’oh! That machine carries every one of our photos since we got a digital camera and a ton of the print photos from early in our childhood. It’s irreplaceable!

But, of course, I have multiple levels of backup so I knew my data was safe. It’s just a matter of getting it back to a healthy condition.

I decided to just let the drive sit there and wait for a replacement to arrive from Amazon. (4TB for $142!) Each file is stored on two physical drives so once I put the new drive in, it would automatically copy the files back onto the drive and I’d be all set.

Well, while I was waiting, the machine reported that a second drive had failed. It was the other one that I had purchased as the same time as the first drive so it’s not completely unreasonable that they failed together, but it still seemed unlikely. Looking through the SMART data on the drive, it looks like it got pretty hot in the case at one point so maybe that led to early demise (3 months after the 2 year warranty expired.) Now I had a mess on my hands and would be forced to pull out some backups.

I didn’t want to wait around so I drove to Best Buy and paid $40 extra for the same drive. Thankfully I was able to get the second failed drive to boot up again so the server was able to heal itself. When the new drive arrived from Amazon, I replaced that second drive because I just don’t trust it anymore. The machine now has four 4TB drives in it and all our files are safe.

I don’t know how you could read this site and not have heard me say it before, but BACK UP YOUR DATA! Hard drives only carry a one or two year warranty for a reason. Here’s the test for whether you are doing enough backups: if I walk into your house, take your computer and smash it with a sledgehammer, did you just lose photos, videos, documents, etc? If so, you’re not doing your backups correctly. Here’s the very quick and very economical solution: http://crashplan.com  Less than $200 will get you four years of worry free backups. Set it up once and forget about it until you need it.