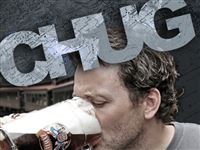 I’m proud to say that I was part of the first fan-funded television show in history! Many of you know Zane Lamprey from previous shows like Three Sheets and Drinking Made Easy. He travels around the world, learns local drinking customs and has a good time doing it. I previously wrote about his Kickstarter to fund a new TV show. His plan was to put in a bunch of his own money, raise money from fans, and then produce a TV show that he would market to networks. It was an easier sales pitch because their cost to produce the content was $0.

Zane has inked a deal with the National Geographic Channel and Chug premieres on Monday, November 24th at 10:30pm (ET/PT). I’ve watched the whole season and love it! Please check it out if you get a chance and then go talk about it on Twitter, etc so that it will get picked up for a second season.

This is a very cool way to make content. The only thing better would be if he had skipped old media and just sold it directly on the web or done a deal with Netflix or Amazon Prime.