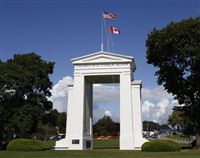 We’re hoping to head up to Vancouver, BC in a couple months and it dawned on me that we have to get Elijah across the border too!

I started doing the math about how long it would take to get a copy of his birth certificate and then get a passport. It’s going to be close. Thankfully since we are driving into Canada, it looks like we can just use his birth certificate. US Customs and Border Patrol has a very helpful website located at http://www.getyouhome.gov. Here’s the relevant info for traveling with a child:

Beginning June 1, 2009, U.S. and Canadian citizen children under age 16 arriving by land or sea from contiguous territory may also present an original or copy of his or her birth certificate, a Consular Report of Birth Abroad, a Naturalization Certificate, or a Canadian Citizenship Card.

I’ve seen other sites (though not as official) indicate that if both parents are not present, they must include a letter giving permission for the child to cross the border. Since Tyla and I will both be in the car it shouldn’t be a problem.

We’ll probably still go ahead with the passport, but it’s nice to know that we don’t have to worry about it not arriving before we head to Canada.