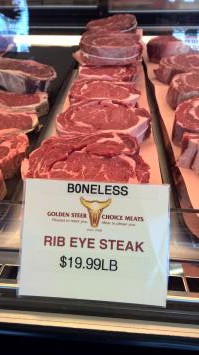 There are a lot of choices when you want to buy a steak. But what is the best? Should you pay $9/pound for a boneless rib eye or $20/pound? While my parents were here, we had some people over to help us test this out in a semi-scientific manner.

I picked up meat from six places: Double DD’s butcher, Whole Foods, Golden Steer Choice Meats, Fred Meyer and Safeway. I bought the same cut at each place. It took a surprisingly long time just to drive around to make all these purchases but we had a cooler in the trunk to keep it all cool while we made the rounds.

We had nine eaters in the experiment. They each had ballot sheets with two required fields for each anonymous steak: rating from 1-10 and guess where it came from. I packaged all the steaks in a similar fashion and grilled two different steaks at a time. Each eater got at least two ounces of each steak and I grilled two types of steak at a time. The test stretched out over a couple hours and it was delicious!

When I was dreaming this up, I half-expected that there would be 2-3 steaks which would have the top scores. However, there was a clear winner and it was my favorite butcher: Golden Steer. They blew away the competition and almost everyone picked them as the best steak. Surprisingly, the other butcher, Double DD’s, scored some of the lowest scores. The Safeway thick cut steak got the second highest score! I did NOT see that coming.

Congrats to Ken who correctly guessed four of the six stores and won the prize for the day: the extra steak from Costco.

Here’s the final ranking of the stores:

One thought on “Meat Day”