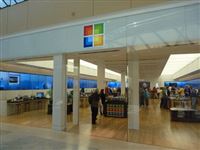 Tyla’s laptop died. It was some kind of hardware failure that we worked around for a while but eventually consumed the device, and I couldn’t resurrect it. It was time to shop for a new laptop.

We get employee deals with most of the major manufacturers through work, but I also included the Microsoft Store in our search. We don’t get any special discount there, but I’ve heard good things about them. Indeed the prices were excellent, they offered free shipping, and if we had picked a model that was in stock, we could have picked it up immediately. Unfortunately that wasn’t the case, but our new HP Pavilion TouchSmart arrived in just three days via UPS for $499. I was amazed that we could get a touch screen laptop for $500. I think the only change we might make to this in the future is swapping out the 5400rpm 750GB drive for either a hybrid drive or a straight SSD.

When the Microsoft Store sells a device, they put their extra special touch on it. When it boots for the first time, you aren’t flooded with a bunch of adware for AOL or McAfee. It’s a very clean machine with up to date drivers. I always format new machines when I get them, but I didn’t see any need* on this one.

If you’re looking for a new laptop, I recommend including the Microsoft Store in your search. You can’t customize the devices like you can buying direct, but you also get a machine that is very clean and ready to go straight out of the box.

* In the end I actually did have to reformat the laptop. The drive was partitioned with GPT instead of the older MBR scheme and my backup solution (Windows Home Server 2011) only supports MBR. There’s no way that I know of to revert from GPT to MBR without killing all the partitions and starting over.