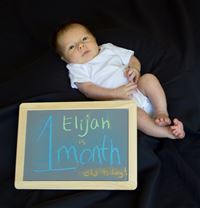 I was told many times, “You can’t prepare for fatherhood” and my joking reply would be, “Great, then I’m not even going to try.” That was sort of true, but even though I don’t think we went nuts planning for parenthood, I did have some expectations. And they were wrong.

The biggest one is probably how often a baby eats. I had heard that 2-3 hours between feedings was normal. Ehh that’s not so bad, right? Well, what I didn’t know was that the clock starts as soon as they start eating. So out of that 2-3 hours, take out 20-30 minutes for the actual feeding, some more time for changing a diaper, and then more time for trying to get him to fall asleep again.

Lots of people told us to “sleep when he sleeps.” Sure, that’s a good idea, but the flip side is that we’re awake when he’s awake, even if it’s 2am. And we’re so used to sleeping once per day for 7-8 hours that sleeping in 1-2 hour segments for weeks on end is really draining! Thankfully Tyla has usually been able to take an afternoon nap with Elijah and I’ve been known to stumble down to my car for a quick 15-20 minute nap in the parking garage at work. I’ve resisted adding up how much sleep I’m getting each night because I think that would make me even more tired.

There have been many times since Elijah’s birth that I’ve thought about the Mark Lowry comedy skit “it came to pass.” He says his favorite Bible passage is “And it came to pass…” When Elijah is screaming in the middle of the night for an hour straight and we can’t figure out what’s wrong, I remember that it’s going to pass. When we’re trying to drive him somewhere and he’s so unhappy in the backseat, I know it will pass. And when he’s snuggled up to me sleeping peacefully, I enjoy it because it’s going to pass!

Today is Elijah’s one month birthday which means that Tyla and I have successfully kept another human alive for one month. (That reminds me of another great comedy skit, this time from Kermit Apio.) The last month has had it’s hard times, but overall I feel like we’ve had it pretty good. Elijah is generally well-tempered and we can usually figure out why he’s crying to get him happy quickly. He’s eating well and gaining weight at a great pace. Every time I look at him, I’m filled with immense pride and excitement for the adventures we’ll have together in the years to come. I love you little man!