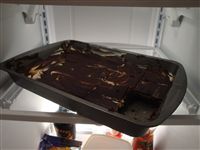 If you’ve ever been to a pot luck meal at church, you’re probably very familiar with mint brownies, at least that’s what I associate them with. These are the brownies with a green mint frosting covered in a harder chocolate frosting.

We put our own twist on the recipe and it turned out fantastically.

The original recipe had instructions for making the brownies from scratch, but we used boxed brownies and it worked just fine. We also skipped the aesthetics of the green food coloring. I also jumped the gun on the chocolate glaze and didn’t let it cool enough. It melted into the peppermint frosting and gave a swirl effect as I spread it around.

Short answer: delicious. We give this one a 3/3.