Tyla and I don’t usually exchange gifts for Mother’s Day and Father’s Day, but I’ve been wanting to try out the vinyl cutter in the maker space at work and this seemed like a good excuse. You can easily buy a very similar sign on Etsy, but I wanted to see how hard it was to make one myself.

I had quite a bit of extra 8/4 maple laying around so I cut it in half and got it down to the approximate size of the finished sign. Then I spent some time on the vinyl cutter and cut out a couple versions of the sign, figuring that I’d screw one up and need to try again.

I stuck the vinyl down on the wood and the peeled up the letters, being careful to leave the interior of letters like A and O. Then I applied two coats of purple spray paint and peeled up the vinyl. That part took quite a while because the paint had made the vinyl brittle, but eventually I was done and it came out pretty well.

The final step was using a keyhole router bit to cut a notch in the back for easy hanging.

Will I do this again? Ehh… maybe if it’s something really custom, but it did take quite a while. If the sign you want is on Etsy for $20, it’s probably worth just paying for it.

Elijah also made a sign for Tyla. Ever since he saw this piece of purpleheart, he has talked about making it into a sign for Tyla. I bought a white pen and he wrote his name on the board. I finished it up with “loves mommy” and added a couple coats of spray lacquer. 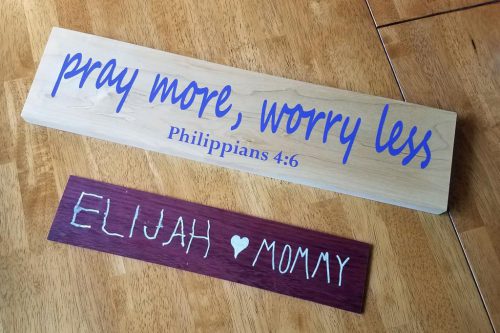 One thought on “Mother’s Day Gifts”