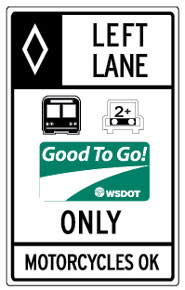 One of the best laws I learned about when I got the motorcycle was that motorcycles are always allowed in HOV lanes (also known as carpool lanes and diamond lanes.) Now that 405 is the fastest route to work, I’m on the motorcycle a lot more because it’s so much faster than sitting in traffic.

I’ve spoken to some drivers who are annoyed by this, but frankly, having motorcycles in the HOV lane is probably a lot safer for everyone. How many rear end accidents do you see when traffic is backed up? Now imagine that you just rear ended a motorcycle instead of an SUV. Yuck.

Buzzing past in the HOV lane on a motorcycle makes me smile, but I’m also on high alert for anyone deciding to whip out into my lane especially when the rates of speed are very different. I generally try not to leave a big gap between myself and the car in front of me, ride on the right side of the lane so I’m more visible to people looking for an opening, and I pay extra extra attention after an on-ramp as people make their way over to the HOV lane.