We recently increased the geek level of our house by adding a network closet! Ever since moving in, I’ve thought about how I would get network cable to every room of the house. It was going to be a pretty daunting task so I shopped around for a bit and finally found a great contractor (recommended by the guy who did our church parsonage remodel) with a great price. He gave me a bid and two days later was in the house to do the project. He worked with one other guy from about 8:30 to 4:30 and got it all done. We now have drops in all four bedrooms, the theater room, the family room, two in the living room, and one above the kitchen counter right next to an outlet. That kitchen drop is the planned site of our kitchen computer that will display recipes etc.

But Ben, what about wireless? I’ll just say flat out that I hate wireless networking. I long ago gave up on trying to make it work reliably so any piece of equipment that doesn’t move gets hardwired in to my network. Additionally, with the Media Center PC, all the TV in our house gets distributed over the network so if the room doesn’t have a network drop, there’s no chance of putting a TV in there. Since I don’t know exactly what we’ll be using each room for over the next 10-20 years, I just put a drop in every room. I also had him run CAT6 instead of CAT5 or CAT5e. This should take me through gigabit and beyond with no problem.

As you can see from the photo, this was a very low budget “network closet.” Instead of a fancy patch panel, I just had him add wall plates. And they aren’t even all on the same wall because of the layout of the house. He added a power outlet in that room too. It’s clearly not being used very much right now, but soon I’ll get to work moving all of our network gear, the home server, and maybe even our Media Center PC into that room. It can be as loud as it wants and it won’t bother anyone.

Right now we leave the door open to that closet, but if we ever want to start closing it, the back wall of the closet is the garage wall, so I could easily rig up an exhaust vent to blow hot air from the computers out into the garage.

All in all I’m extremely happy with this project. The price was right, and I know this would have taken me multiple weekends to complete. He and his co-worker did it all in a day and they didn’t even have to cut any extra holes in the drywall to get through the fire blocks on the tall walls.

If you need any electrical work done, call Greg’s Electrical Services (425) 957-4630. I have my eye on a whole house surge protector and power conditioner. I’ll be calling Greg! 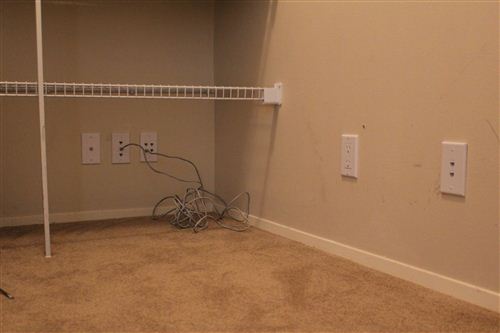