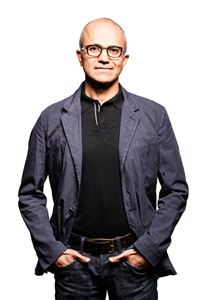 Microsoft has a new CEO! I’m sure it’s a bit intimidating to be on a list of three CEOs with the other two being Bill Gates and Steve Ballmer, but I’m really happy with the choice of Satya. He’s probably not a household name (yet) outside of the company, but internally he has been doing a fantastic job.

I’ve been in his org for quite a while, and I’m particularly happy that they picked someone who is so familiar with our cloud and enterprise offerings. When you hear analysts talking about Microsoft and they only mention Xbox, Windows Phone, Bing, etc, you can mostly dismiss them because they’re missing the biggest moneymakers for the company. Satya’s org was one of the three main pillars of Microsoft’s revenue (Windows, Office and he ran cloud/enterprise offerings.) It might not be a flashy org, but we crank out around $20 BILLION a year. That’s about 25% of the entire company’s revenue and this org has seen double digit year over year growth for more quarters than I can count.

So while it would be fun to have a flashy, public figure as CEO, I’m happy that we have Satya who intimately understands the core businesses of our company. (And it doesn’t hurt that he loves the product I’m working on too!)