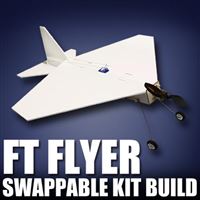 I waited all week for the weekend to arrive so I could attempt another flight. On Saturday I headed to a bigger park, checked over the plane, connected the battery and took off. My flight couldn’t have lasted longer than a second. Checking over the plane, I discovered that one of the set screws that holds the prop in place was missing. There was no way that I was ever going to find that tiny little screw in the grass so I headed to the hobby store down the road. After admitting my complete newbie status, they were able to point me to a new pack of screws and a couple other spare parts that I’ll probably need too.

The plane repair went quickly and I was ready to take off again. This time it worked! No mistakes! Eventually my heart stopped racing and I was actually able to get it trimmed out and enjoy the flight! I flew through the first battery (about 6 minutes), popped in the second one and flew through that too. The plane doesn’t fly beautifully. It’s only has throttle, elevator and rudder, but it’s still a lot of fun. I can’t wait to get it up in the air again! I might pick up a couple more batteries so that I can fly for a bit longer on each trip.