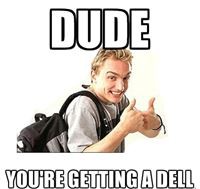 Our church is using some ancient computers. It was about 5 years past the time when they should have been update so I volunteered for the project. While the details of the project probably aren’t interesting, if you’re in the market for a new computer, you might be interested in what I picked out.

The main office computer is the most heavily used. It runs our financial software and is the hub for just about anyone who needs a computer at church. It’s also going to act as the network file server. For this computer, I chose a Dell XPS 8700 for $699.99 plus tax. The key specs are a Core i7-4790 processor and 8GB of memory. Dell doesn’t ship them with an SSD (that seems insane to me) so I picked up a Samsung 840 256GB SSD for $216. There are cheaper ones out there but these Samsungs are great. The end result is a nice machine for right around $1000 after tax. This would be good if you’re planning some slightly heavier than normal use of a computer and/or you want it to last an extra year or two before it feels old.

The second computer goes in the school and 99% of the time, it’s just acting as a sign in computer. The teachers will also use it for some basic web browsing every once in a while. For this computer I got a Dell Inspiron 3647 for for 399.99 plus tax. This one came with a Core I3-4150 processor and 4 GB of memory. I left the old fashioned 1TB 7200rpm hard drive in there. It will be good enough. And that’s the key for this machine: it is more than capable of doing basic web browsing, Office documents, etc. If that’s all you need, this is an excellent deal. Note that neither price includes a monitor. I’m just reusing what is already there.

They are two very different machines for very different purposes. If you’re in the market and want some advice, I’m always happy to help. The biggest thing I’ll say is that an SSD is the most important piece of equipment you can get in your new computer. I won’t ever buy another computer without one. Unfortunately they aren’t always included when you buy from a place like Dell. I’m sure that will change soon with rapidly plummeting SSD prices, but never fear, you can generally add your own in later. Just make sure you factor that into the price.

I said I wouldn’t go into the details of the new setup, but there’s one key piece you probably already guessed: all of the computers on the property will be running CrashPlan for offsite backup!