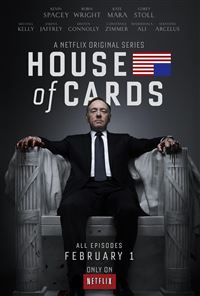 We’re all familiar with CBS, ABC and NBC, but the new “TV channels” are shaping up to be Amazon, Netflix and YouTube. All three companies are purchasing exclusive content for their sites. And these are some pretty big deals with names like Kevin Spacey, Bill Murray, and John Goodman. When you stop and think about it, if you have a Roku box or some other way to watch these sites on your TV, there’s very little difference between watching a show on Amazon or watching a show on NBC. House of Cards was released recently on Netflix and got great reviews. There are a lot more shows in the pipe including a new season for Arrested Development which I’m thrilled about.

Looking ahead 5-10 years, it’s pretty easy to imagine this type of “TV” taking over the traditional television model. On Netflix, Amazon and YouTube, producers can create the exact show they want. There’s no need to break at specific points for commercials or create a 1 hour show that is exactly 42 minutes long so that all the commercials fit. Plus, all the episodes can be released at once which is increasingly how people like to consume a series.

It’s all very intriguing and there are plenty of people cutting the cable cord to consume their TV completely online. While I love the idea and do consume content from the web, I’m still happy with cable TV for the sheer ease of use. Cable comes into my house, gets recorded by one of the four tuners in my Windows Media Center PC and then gets streamed out to the various TV’s in our house, computers or even our phones. Doing something similar without a cable subscription requires us to remember which app we open to watch which show and right now it’s not worth the hassle for our household. Kudos to those of you who are blazing a trail for the rest of us!