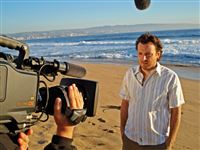 For those of you who were fans of Three Sheets and Drinking Made Easy, there’s good news: Zane Lamprey is attempting to launch a new show! It will be in the same vein as the previous shows. He travels around the world, enjoys local alcohol, learns a bit about the culture, and has fun doing it. He’s a got a good formula and it’s been frustrating to see him have such a hard time getting a network to support him.

He’s finally given up (?) on the networks and decided to fund this effort through Kickstarter. The show is called CHUG and they’re trying to raise $500K. It’s a lofty goal so I hope you’ll join me in pledging a few bucks to help him out. If you’ve never done a Kickstarter project, it’s pretty easy. The site lists out what you’ll receive for giving various amounts of money and you only pay out if the project hits it’s fundraising goal. There’s no guarantee that you’ll actually receive any of the rewards though! It’s possible that whatever you’re sponsoring will go belly up and fail completely so keep that in mind. I don’t have any fear of that with Zane’s project as he’s a pro at this and has been doing it for a long time.

Starting a project like this also means that once he reaches his goal, he can walk into a network and say “Look, I’ve already got the money to produce the show. All you need to do is pony up the cash to promote it and give me a time slot.” That’s a pretty interesting offer, especially with all the new Internet networks that I blogged about yesterday.

PS. If you are a fan of Zane, be sure to listen to his weekly podcast!