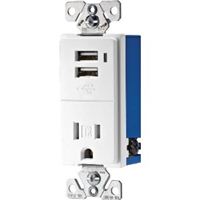 When we bought this house, the inspector found a few outlets that didn’t work and quite a few that didn’t hold a plug very tightly. Since I had to replace quite a few, I decided to just replace them all. We chose to go with the Decora style outlets and switches. Those are the rectangular ones. I went for the tamper resistant outlets meaning that it’s difficult to shock yourself by sticking something in. Replacing the existing outlets and switches is a pretty simple process (once I picked up a device that helps me figure out which circuit I should shut off), but it’s time consuming.

Most of this is pretty boring, but it’s fun to look through the Leviton product catalog and see all of the interesting stuff that they offer. Here are some off the non-standard things that I’ve installed:

The other day I was standing in a bar with my boss and we were going back and forth rattling off different fun things we had seen in the Leviton catalog. That’s when I knew that unequivocally, I was an adult. A geek, but an adult.