Over the past couple weeks, I’ve noticed Elijah playing on his own a lot more than he did before. The coffee table is one of his favorite play spots right now. I want to support these activities, but it’s hard to watch him smashing his cars around on the table. I’ve put plenty of my own scratches into the table, but if he keeps at this for a couple months, we’re going to have sawdust on top. I’ve been trying to figure out a good way to build him some sort of bigger play table anyway, and one day it dawned on me that I could solve both problems with one project.

I had a scrap piece of plywood that was big enough to cover the coffee table so I cut it to about the same size and trimmed it with some simple 1×4 pine. Using pine takes a little extra time because it pays to fill all the knots with wood filler, but it’s so cheap that it’s worth it for a project like this.

It only took a night or two to complete the build and then the painting began. Thankfully we had a semi-sunny weekend so I set up the saw horses in the driveway and started painting. I covered everything with a coat of Kilz primer. The rim was painted white and then, after taping, the inside was painted with four or five coats of green. I did all of it with spray paint and kept it smooth with some fine sanding every once in a while. I finished it off with a few coats of spray lacquer.

I had thought about painting a road onto the board and even laser cut some paper to use as a stencil. I didn’t use them though because I wasn’t confident that I could get a clean enough line using the templates.

The end product works perfectly. We already had some soft foam around the edges of the table. This slides over the top of that foam so nothing is touching the actual wood of the table.

Elijah spent a lot of time playing at that table the first day. I spent less than $4 on the project (not including leftover spray paint and lacquer) and used up some scraps. He can beat this up all he wants, and it’s really nice to be able to spread out his Legos without watching them spill off the edge of the table. 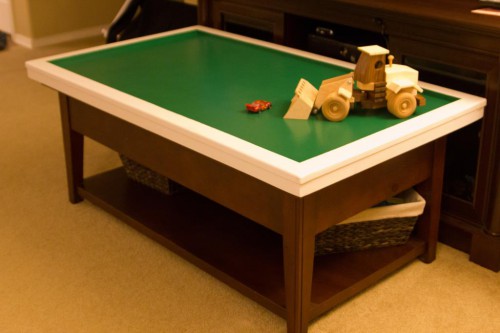