On one of the hottest weekends of the year, we headed to eastern Washington (where it’s even hotter) to camp in the Potholes area. There is a state park nearby but we weren’t inside the park. We were actually inside the larger Columbia National Wildlife Refuge. The potholes area is a large number of smallish lakes that were partially natural but mostly man made. When a dam was put in place nearby, it raised the water table enough to create these small lakes. Because of the rock formations, most of the lakes feature sheer vertical rock faces down into the water which happen to make for great cliff jumping.

There weren’t any official campsites where we ended up but we found a good spot and set up our tents along one of the lakes. Even aside from the lack of running water, it was a lot different than our normal camping. There was no natural shade and we were essentially camping in a desert. And oh yeah, it was also a free range cow pasture so there were cow patties everywhere and coyotes howling at night.

Tim, Chelsea, Brittney and Devon got there on Thursday night but Tyla and I arrived on Friday night. On Saturday we did some cliff jumping, the highest cliff was measured at 21 feet, and spent most of the hot afternoon (upper 90s) lounging in the lake. Tyla and I picked up a dual innertube with a built in cooler in the middle. Unbeknownst to us, Tim and Chelsea had the exact same one!

It was a great trip and a fun new experience. The dogs had a blast running free and playing in the lake. Thanks for sharing your secret spot with us!

Photos are available in the photo gallery and a few of my favorites are right here in the post. 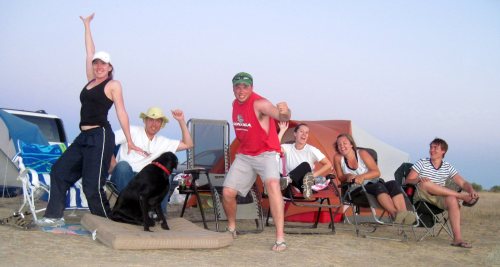 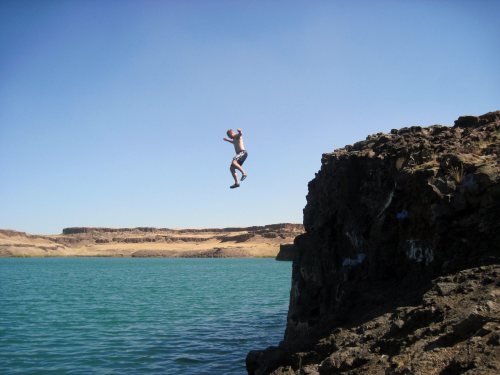