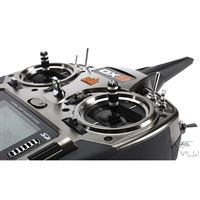 One of the most confusing parts of getting started with RC airplanes was trying to figure out which radio to buy. First of all, you don’t even have to buy one. You can just buy planes that come with cheapo radios. I knew I didn’t want to go that route because it ends up costing more and you don’t get to use a quality radio along the way.

If you decide to buy one that can work with lots of planes then you have to figure out which brand you want: Futaba, Hitec, Tactic, Spektrum, etc. Not knowing much about the differences, I assumed they were all kind of the same. Wrong. In general, each brand only works with it’s own brand of receivers and if you want to hook two radios together for teaching purposes, they have to be the same brand.

The simulator I bought came with a Tactic radio (Tactic TTX600.) While there’s nothing inherently wrong  with this radio, I later realized I want to invest in Spektrum. A huge number of Bind And Fly models come with Spektrum receivers in them. So if you have a Spektrum radio, you’re good to go. That meant that I ended up rebuying a similarly inexpensive Spektrum radio (DX5e) and then later on I’ll get a nicer computerized model (DX9?)

The detour through the Tactic radio only cost me about an extra $70 but it’s still something that you can avoid. Take some time to understand the differences between the brands, talk to friends who fly, look at planes you want to buy, and then make a brand choice. Simulators can work with a variety of brands.

It sounds like people sometimes end up with multiple brands of radios as they progress in the hobby, but to start with, you probably don’t want to keep spending money on radios.