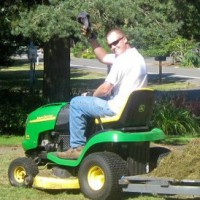 No, I’m not retiring from my job, at least not from the one I get paid for. For the past six years, I’ve been the “property deacon” at church. Basically it’s like a property manager. I’m responsible for the physical property (grounds, buildings, etc.) I’ve enjoyed the volunteer position, at least most of the time. The last six years have seen some major projects including a huge renovation of the parsonage, a new fire alarm system, a new church sign, an irrigation system and many other projects. More recently, I’ve felt like I’m unable to devote the amount of attention to the job that it deserves so I’ve decided to step down and not sign up for another term. Due to some reshuffling of the bylaws, there will be a few people taking over the property work. I think that’s going to work out better. TimS is one of the guys doing the job so I have no doubt that he’ll rely on me as much as I relied on him (which was a lot!) I’ll still be involved, but honestly, I’m looking forward to not being the guy in charge.