When we moved to Woodinville in 2011, I noted that our house was positioned very well for me to ride to work. It’s only about a mile down to the Sammamish river trail and then I take that all the way into Redmond with about a mile or so from the end of the trail to campus. Here it is, 2015, and I hadn’t done it yet. So finally I circled a date on the calendar and made it happen.

That date ended up being the hottest day of the year to that point, but I didn’t let it deter me. The ride into work was pretty nice for the first 8.5 miles. I even had a bald eagle flying overhead right above the trail for a little while. But there was a problem lurking. Google Maps has a nice bike route feature that includes an elevation view. As you can see, there’s a 400 ft hill on each end of the route.

That last 1.5 miles up to campus is brutal. I started off thinking that I would slog it out and make it all the way without stopping. I failed that, but I only walked for about 100 yards of the hill. And I’m not going to lie… when I made it to the top of the hill, I felt like I was going to pass out and I had to sit and rest for a while. I’m an old man. But the trip was a success. I made it in 1 hour and 2 minutes, just like Google predicted.

Work provides us with a badge-locked storage area for bikes and a locker room with towel service so that I didn’t stink all day. It was the first time I’ve ever used those perks of the job and they’re pretty nice to have!

The flaw in my plan was that I underestimated how tired I would be after riding to work and then working all day. So I swallowed my pride and asked Tyla if she wanted to meet me at a park along the trail right before where I would need to break off and head up the big hill to our house. The ride there wasn’t too bad although there was about a 10 mph wind blowing in my face and I was pretty tired by the time I got to the park. It’s a good thing we set up that rendezvous. I was happy to throw my bike in the car and drive up the hill.

Will I do this again? Maybe someday. It would be fun to get in shape and be able to handle this a little better. I do think that I’d want more of a street bike instead of a mountain bike. And it’s hard to justify the extra time out of my day when time is so precious right now. 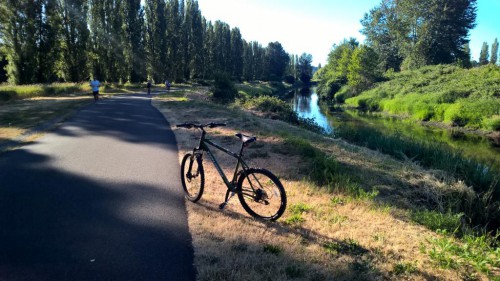