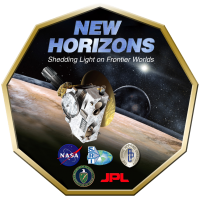 On January 19, 2006, the New Horizons probe left earth on it’s long journey to Pluto. In less than two weeks, it will make it’s closest pass to Pluto. Let’s take a minute to ponder some of the incredible math/physics associated with this journey: