When I bought the condo in 2006 as a bachelor, I decided I needed something for the walls that didn’t look like it was a college dorm. But I didn’t want to pay tons of money for actual artwork. Instead, I bought a couple posters from the internet and then took them in to get them custom framed. It seemed like a good compromise.

My mistake was going to a place that does SUPER nice frames instead of a craft store that does frames for normal people. I had no idea there was a difference and ended up paying probably three times more than I needed to. Oops.

One of them has a sunset skyline shot of Seattle and it looks pretty nice, but the other is just a generic abstract art piece. I thought it looked fine until I saw the same thing hanging in a cafeteria at work. Hmm…

This past weekend, I decided that I was going to take the frame apart and see if I could put one of my own pictures in there. Overpaying for a frame with a cheapo poster in it seemed silly, but having a beautiful frame for a photo I took myself? That feels more logical/
It turns out that a fancy professional framing job is still the same basic idea as other frames. I peeled off the construction paper covering the back of the frame. Then I opened up the insides and saw that the poster was attached to a piece of foam board and fit into an opening in the matte.

I needed a 24×24″ print to fit in there and that was a little more tricky than I though. Most places only go up to 20×30″. FedEx does bigger prints but they wanted ~$60. Walgreens also does bigger prints and they had a half price sale going on that brought the price of my 24×36″ print down to $15!

I used a straight edge and an exacto knife to trim the photo. I didn’t do anything too fancy to mount it in the frame. I just used a combination of scotch tape and packing tape to fix the print to the foam board. Then I put the frame back together and voila!

The hardest part was probably trying to find a picture that matched the matte well and also looked good with a square crop. The picture would have matched the room slightly better if it had a little red in it, but this still looks pretty good. The photo was taken on a camping trip in 2012 near Bay View State Park. 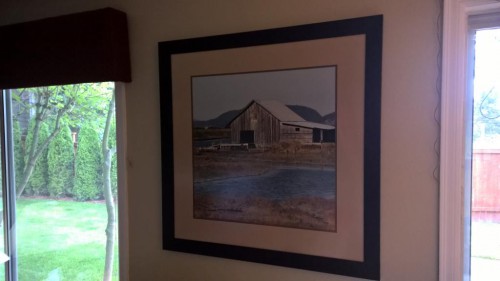