I’ve had my 10″ Ridgid sliding miter saw sitting on a cart for quite a while. With my smallish work area, it’s nice to be able to roll it around. The cart was originally built mainly as an outfeed table for my table saw, but I rarely used it that way. While the miter saw fit well on the cart, it was tricky to cut longer boards because I had no good way to prop up the ends.

One of Jay Bates’s earlier videos (before he got better at editing them) showed some foldable arms that he built for his miter saw cart. It seemed like an easy solution and I was able to build it with scraps leftover from the table saw stand.

You can pretty much see the entire design by looking at the pictures below. There’s not much to it. The hinge points are just Kreg screws that are normally used for pocket holes. Since they are only threaded halfway, it makes an easy hinge point.

The trick is whether or not they will last a long time. I already had one part split as I was putting it together, and of course, as I showed it off to Don, the arm snapped off. I rebuilt that part a little better the next day and now everything folds pretty nicely. I don’t have a whole lot of time or money in these so even if they only last for a few projects, I’ll be happy (and most likely they’ll last longer than my desire to have the saw on this cart.) 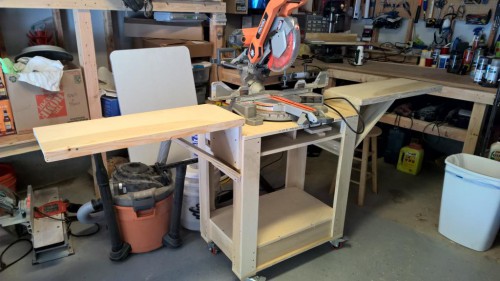 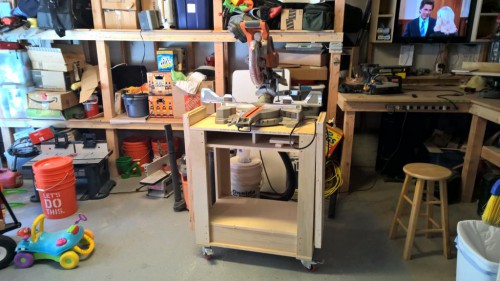