On Saturday, Tim and I set out to do the longest hike yet. It starts with a 12 mile drive down a dirt road and then you hike 7.5 miles into the Alpine Lakes Wilderness to Snoqualmie Lake. For those of you playing along at home, it’s hike #18 from Beyond Mt. Si.) It’s a huge lake and there aren’t very many people there. We found out why.

The first 5.8 miles are fairly easy as you only gain about 600 feet and it’s along a very old, narrow road. The trail follows the Taylor River and crosses a couple waterfalls that are destinations in their own right. The trail is decreasingly small as it gets closer to the fork at 5.8 miles. The south fork heads to Nordrum Lake but we headed north to Snoqualmie Lake.

The next 1.7 miles were some of the roughest trail I’ve hiked. The trail was very narrow and crossed a number of large rock slides. It turns out that trails up the mountain also make a great place for water to flow down the mountain. Much of that stretch of the hike was up small creeks and there were a couple places where we crossed fairly large streams on logs that people had placed over the water.

We were getting pretty tired by the time we hit the lake, but wow was it gorgeous. There were three other small groups there that had set up tents and that was definitely the way to do this hike. We only met two other people on the whole hike who were doing it all in one day. After 3.5 hours of hiking, we spent 30 minutes at the lake, had lunch and then headed back.

The hike down to the fork actually took us a bit longer than the hike up did. Trekking poles would have come in very handy. I had some in my hands at REI the day before but made the mistake of not buying them. We were happy once we got back to the fork but the prospect of hiking 5.8 miles wasn’t looking great. By about the 10 mile mark, I was getting tired and by 12-13 my feet were starting to scream at me. By the time we got to the car, I had a new definition for tired and sore.

The lake was beautiful. I’m glad we did the hike so I know that it’s possible, but I’m not itching to do something that big again in the near future.

Pictures from the hike are available in the photo gallery and an HDView photo is available too.

PS. On Sunday morning, Tim and I were talking about how sore we were when ScottF’s wife came up and told us he summitted Rainier on Saturday. In ONE DAY. Nobody does it in one day, but he did. 21 hours of hiking from 6000 feet to 14,000 feet in snow the entire way. All we did was hike 15 miles to a lake and back. I feel like a wimp. Kudos to Scott though! I hope to follow in his footsteps (although probably a lot slower) some day. 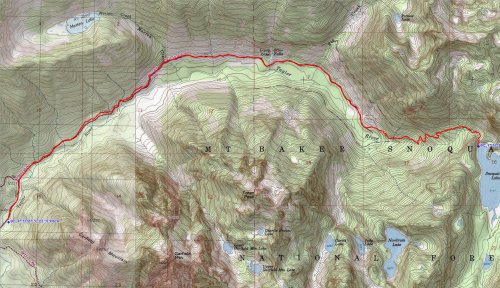