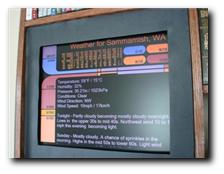 This is a good example of what happens when I have too much time on my hands. It started when Tim and I were watching a Star Trek movie and thought about how it would be interesting if we could talk to the digital photo frame.

I downloaded the Microsoft Speech SDK and started coding. In just a few hours, we were able to talk to the frame and get information like the current weather and the current deals on Woot, SlickDeals, and Steep and Cheap.

It's still a little rough around the edges. I want to make it scroll the text vertically when there is too much to fit on a single screen. I'm also trying to figure out how I can get it to stream TV from my computer in the bedroom by simply saying "Computer, ESPN!"

So check out the video below for a demo of the voice commands in action. It was my first attempt at a two camera shoot (a digital camera and a camcorder.) It was a lot of extra editing work, but I think it was a nice touch. Unfortunately I forgot to align the color balances before shooting so I just went with black and white instead.

Get the Flash Player to see this player.

[UPDATE] Forgot to mention that this is also availble for download in the Videos section.

[UPDATE] If you would like to see the code or even contribute to it, head over to http://www.codeplex.com/photoframe/